"Meet the new Boss. Same as the old Boss"
The Who, Won't get fooled Again

I picked up the new car today. The Cayenne Turbo was not dead (yet) but damn close and worth more dead than alive. While she was reliable and a joy to drive and ride in day to day, hidden under the surface was a series of issues which were never cheap (much like an old girlfriend; also like an old girlfriend, the internet is not the best place to buy one!). I will share the tale of her demise another time as that story is not fully ended yet. Here is the new baby: 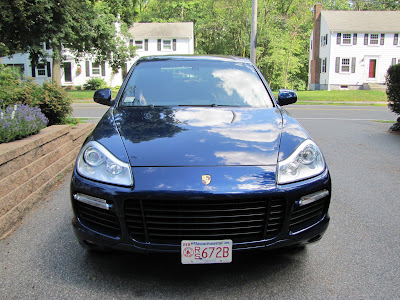 Well not quite. Here's a photo of the old car (or same model found on the interweb).

Both are the same blue, but mine is a 2008 Cayenne GTS vs. 2004 Cayenee Turbo. IF you look closely on the back, you can see the badge. 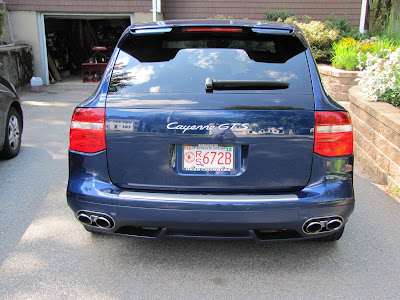 Other than that they are pretty similar. The GTS is designed to look like a Turbo: big wheels, big brakes, big air intakes. But actually has about 95 less hp with the improved mileage traded for performance (still 6.5 0-60 vs 5.0 for the turbo, gas mileage gets up into the 20's so its no hybrid). It's the "Gen 2" so everything from the engine to NAV/radio works better as they have worked out some of the earlier problems (see class action suit). I got good value for the Turbo (worth more dead than alive) so while I hadn't planned on a new car, the hit was manageable. It has all the same features of the old one (adjustable suspension, parking sensor which I have come to rely on). The big upgrade is the twin DVD in the head rest and the panoramic sunroof option (see below) as well as heated mirrors/steering wheel. (back seats still have heating). Maddy says its like riding in a convertible without messing up your hair. 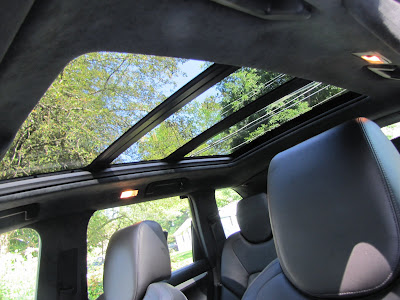 Liz also got a new dream car as they swapped our Kia loaner for a Panamera 4. Never thought she would drive one before I did.